Ok, I must admit- I have an addiction. No, it's not drugs or alcohol, it's with a certain brand of coffee. I just can't live without it (I've tried, and it wasn't pretty)! My brand of choice, that I affectionately call my "coffee stuff", is the French Vanilla Cafe from Maxwell House International Cafe. I love it, and drink so much that we buy the mega-ultra-friggin-huge containers of it at the wholesale club. The containers it comes in are a nice sturdy cardboard, but usually end up in the trash once empty because I have no clue what to do with them.


A few days ago I got a cool idea on a way to reuse them from one of my favorite websites http://www.pinterest.com/ - as a storage container for all of my daughter's hair accessories! She, like many other little girls, has a ton of hair elastics, clips, and bands for her beautiful mile-long hair. We've been storing all of it in a ziploc bag ever since we moved in, but the bag was ready to fall apart from so much abuse. It took me only a few minutes and some scraps of fabric and ribbon to turn my "coffee stuff" container into an ultra-girly hair accessory container that holds all of Lia's hair do-dads. Her headbands fit wrapped around the outside of the container, and everything else fits inside. Here's the before and after:
BEFORE: 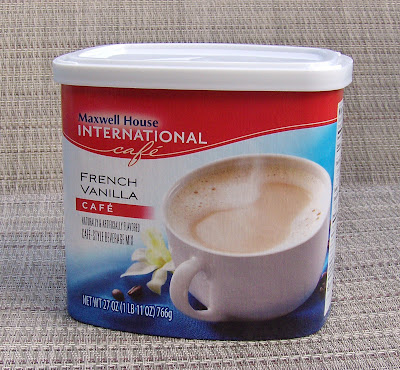 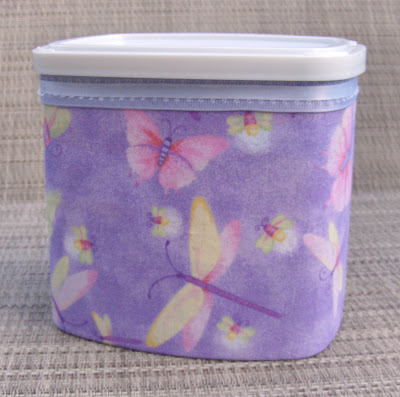 Email ThisBlogThis!Share to TwitterShare to FacebookShare to Pinterest
Labels: crafty

Once upon a time, one of my awesome friends left a disposable plastic bowl cover at my house after a party. Although I had seen covers like this before, I never bought them because I thought they were silly. I decided to wash and reuse it after the party 'cuz that's how I roll (see my previous post about my distaste for disposable products). Little did I know just how useful this shower-cap looking cover would be. For those of you that have never seen these silly covers, here an example of one: 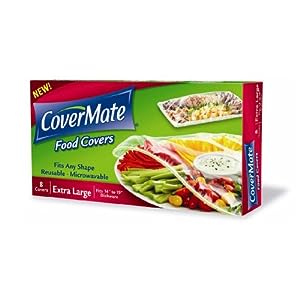 I use the cover all the time! It's very handy for covering casserole dishes when there's leftovers (doesn't happen often, but it does happen), and absolutely fantastic for covering bread dough while it's rising. After over 6 months of repeated use and abuse, my silly shower cap was looking pretty worn and tired :o( I didn't want to go out and buy an entire box of disposable covers, so I decided to make a reusable one instead. This one is the same size as the plastic one, but with lots more flair! 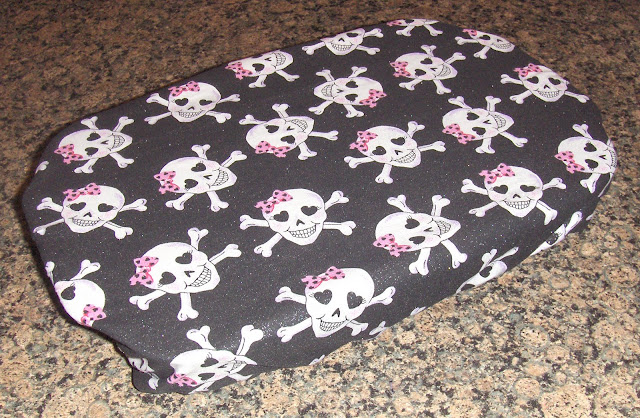 It's lined with PUL from the very same mattress cover that I used to make the snack baggies, and covered with an awesome skull print cotton fabric on the outside. There is elastic around the whole cover so it fits snugly on all sorts of different size containers (it measures about 19" square, and is shown on a 13" x 9" baking dish). I just used it to cover bread dough while it was rising, and it works fantastic! It's so easy to clean too- just wipe off or toss in the washing machine. I will definitely be making at least one more, perhaps a bit smaller.
Posted by Hilary at 7:53 PM No comments: 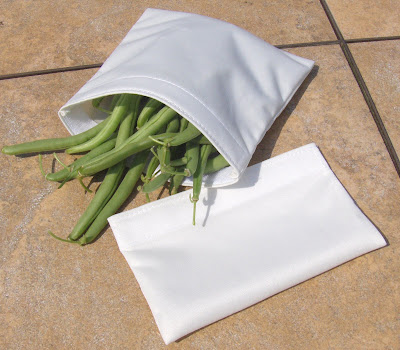 Ever get sick of buying sandwich baggies just so your kids can throw them away at lunch time? I know I HATE buying things just to throw them away after a single use (with the exception of toilet paper, of course). It's such a waste of resources and money! So rather than just complain about it, I decided to make these cute reusable baggies out of repurposed materials. The fabric I used is PUL- polyurethane laminated- fabric that I found at a charity yard sale. It was actually a mattress cover, and I purchased it for the rich sum of $2. It has loads of fabric to it, so I can make as many of these little baggies as I want, though I think 10-12 of each size will do. The large baggie (shown stuffed with green beans from our garden- YUM!) measures about 6" x 6", and the smaller one measures 3 1/2" x 6". I used velcro as a closure so it will be easy for my little minions to open and reclose themselves. The best part about these is that they are super easy to clean! I can just wipe the inside with a damp cloth, or if they get super yucky I can toss them in the dishwasher or washing machine. There is a similar tutorial for how to make these HERE if you're interested in making your own. The kids are excited to use these at school, and they will be great at picnics and the beach too :o)
Posted by Hilary at 2:59 PM 1 comment: 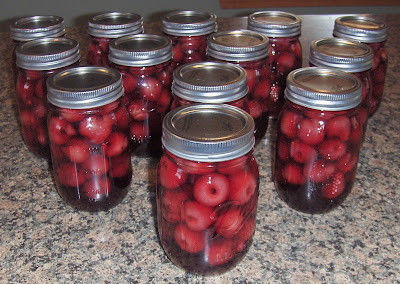 Ok, so they're not really bloody eyeballs, but they look like it , right? These are actually cherries that I canned yesterday ( I know, boring compared to eyeballs, but much tastier). Lia helped me while I was pitting the cherries, and it looked like we were in an episode of CSI- our hands were covered in cherry "blood", there were blood spatters all over the counter, and my skeleton apron had blood dripping from it LOL. Wish I had taken a picture of the crime scene, but it's hard to do with blood on your hands ;o) I was able to can a total of 13 pints of cherries. I haven't tested these out yet, but Caleb has and he declared them "yummy".
So far this summer, I've canned 16 pints of peaches, 15 pints of pineapples, 13 pints of cherries, and 8 half-pints of blueberry jam. This is way more than I've ever done previously, and I have plans for lots more. Come check back later for more delicious crime scenes!
Posted by Hilary at 1:18 PM 1 comment:

Hilary
Hi! I'm Hilary and I am a stay-at-home-mommy of 4 crazy, crafty, and chaotic kids that keep me busy and make me crazy too ;o)